Bring on the albatrosses! 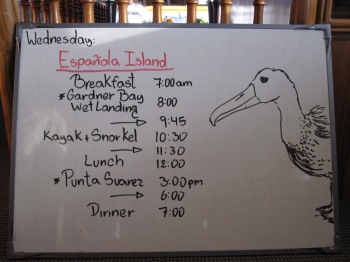 As the boat headed for Punta Suárez, we sat out on the decks and watched along the far horizon.

We occasionally caught glimpses of what we thought were whales spouting.  Could have just been mirages or hallucinations or whatever…  Groups of Galápagos Shearwaters formed and disbanded

only about 2.5 miles long but about 3 hours to complete.  Clearly lots of stops were planned!  A striking American Oystercatcher (right) hung out on the rocks as we headed up off the beach. After working our way through some low, scrubby brush, we entered a pebble 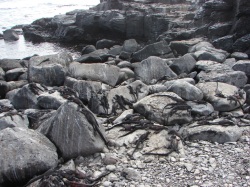 beach area where Marine Iguanas breed.  We were greeted by a pile of them as we started across (left).  Past the iguanas, another juvenile Galápagos Hawk unconcernedly surveyed the area as we walked past (below).  A Nazca Booby is perched above it in the photo on the right; these boobies nest along the shore and cliffs, while we’d see courting Blue-footed Boobies courting inland.

We saw a number of Hood Mockingbirds—several looking rather scruffy and disheveled, which apparently is not uncommon for this species.  These birds often can be found in family groups, where older offspring of the parents stick around and help to raise younger siblings.

We came across a finch nest, probably from the previous season since it wasn’t

breeding season for the songbirds when we were there.  The finches build domed nests like this one, probably to help keep the strong hot sun off the nestlings.  (In the western U.S., Black-billed Magpies make giant-sized version of these twig nests.)  Zell also snapped photos of a couple of ground finches.  This ID was a pretty easy one.  Since we were on Española, they could only have been Small Ground Finches.  The only other Ground Finch likely on this island is the Large Cactus Ground Finch, which has a much flatter forehead and a longer, more slender beak than these birds do.  (The two photos on the left are of a female; since the bird on the far right is mostly black on the back and dark all over, it is a male.)