At the south end of James Bay, Puerto Egas is 2 trails—one leading to a now-defunct salt mine and one leading to the grottoes.  (The photo above is from the National Park Web site; click here or on the photo itself to read about the NP’s write-up of this landing.)  The salt mine is really at the top of a crater on Salt Mine Volcano.  Salt was mined at this spot in the 1920s and again in the 1960s; Puerto Egas is named for Hector Egas, the owner of the mine in the 1960s.  This most recent attempt to mine salt ended because the price of salt on the mainland became far too cheap to justify the expenses of mining and shipping the salt from the archipelago.

As we motored the short distance to Puerto Egas during the lunch break, Zell stopped by the bridge to chat with Captain Eduardo (which he had done a number of times during the trip).  He took photos of the various gauges and instruments used to pilot the lovely Mary Anne.  Captain Eduardo can be seen at the helm in the 3rd photo.

The landing on Puerto Egas was an easy beach landing on a lovely black sand beach (below, right).  The

official greeter seemed to be a lovely Lava Lizard (below, center)—probably a male because he lacked the red along his face.  A number of Land Iguanas lounged on and under the rocky surface.  (I especially like the video snippet below of one of these critters moving to lower ground as we passed.  At the risk of anthropomorphizing, the look on its face seems to be one of solemn interest.)

Zell got a good vantage point above a Galápagos Mockingbird, showing the lovely

feathering on its wings (left).  The feathers on this bird are quite fresh (click on the photo for a larger version); later in the summer, those delicate light tan edges of the individu

al feathers will have worn off, leaving an overall duller look to the birds.  A Wandering Tattler in non-breeding plumage (no barring on the underparts) stopped briefly along a rocky edge; Zell caught its characteristic bobbing and preening in a short video clip (below).  This shorebird’s name (“tattler”) reflects folklore that believed that its rattling call warned other birds of a hunter’s presence; “wandering” derives from its large range.

We passed a sm

all group of relatively large Marine Iguanas resting on the rocks (left).  A lone iguana left its perch on top of the rocks to a more sheltered spot, where it watched us pass by just a few feet away.  Zell captured its observation of us on a brief video clip (below).

The lava was dramatic and provided some interesting rock features (below).

A quartet of Marine Iguanas (below) appeared to be considering whether or not follow their buddy (whose head you might be able to see, already swimming away, glistening in the upper right) and take the plunge. 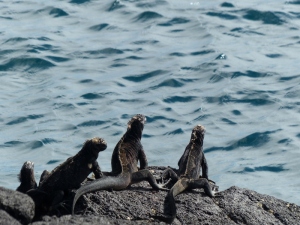 The water in the grottoes was just beautiful—rather a Caribbean blue—and a bit hypnotic as it moved in and out of the caverns.  People used to be able to swim in the grottoes; however, the National Park no longer allows swimming—by humans, at least—to help preserve the area.  (Note the Galápagos Fur Seal in on the rock ledge above the water in the 4th photo.  As always, click on any photo to see a larger version.) 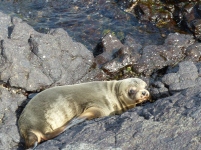 family, rather than true seals) all day.  Sea lions differ from seals by having external ear flaps; their hind flippers also rotate forward, under their bodies, which allows them to maneuver on land better than seals can, 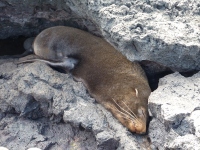 whose hind flippers don’t rotate and who basically have to just drag themselves along on land powered just by their front flippers.  These sea lions have

thick fur (hence the name) and were nearly hunted to extinction for their pelts.  However, they have made a considerable comeback.  They prefer to loll in the shade of rocky cliffs and ca 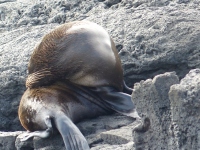 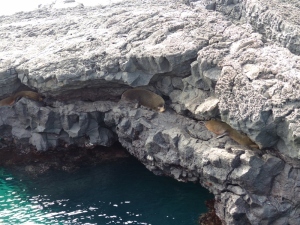 And this short video snippet of a Galápagos Fur Seal “snuggling” in to a rocky rest spot always makes me smile.

Now dormant, the tuff cone of Sugarloaf Volcano looms more than 1000 feet over the coastline.

A Lava Heron fished from the rocky walls of the grottoes, at times lurkin

g in the shadows of a crevice and at times watching intently out in the open.  If you know North American birds, you recognize that the Lava Heron is in the same genus as our Green Heron (Butorides)—and both are excellent, patient, stealth fishers.

Again, the feathers offer a gorgeous portrait of their own (below).

And 2 happy travelers close their last afternoon in the archipelago as they head back to the beach and the pangas. 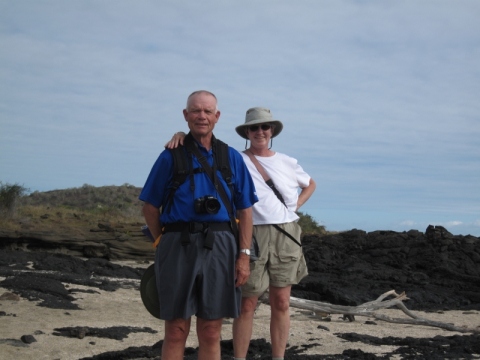 But little did we know that the adventure were far from over.  As the pangas headed back to the Mary Anne, they began idling a ways away from the boat.  Suddenly, we realized that the crew were hoisting the sails of the boat!  At last, we were going to get to enjoy the beauty of this majestic barquentine, doing what she was designed to do, from afar.  Really lovely!  The video clip below captures just a small feel of what the experience was like; in the beginning of the clip, you can hear Zell talking about the various sails.

After about a half hour, the pangas approached the boat and we boarded.  It was quite a challenge to get on board the boat while she was under way (still sailing under wind power unassisted by the engine).  A larger than usual number of the crew greeted the pangas, to provide extra manpower for getting us all safely on board.  As Carolina put it, it was our final exam: “Now you are all sailors!”

It was late and we needed to start packing, at least a bit, for our departure tomorrow morning.  I headed down to the cabin to begin this sad job but Zell made a beeline to the outside bridge, where Captain Eduardo was piloting the Mary Anne.  After I had been in the cabin for about 10 minutes, the phone in the cabin rang.  Carolina’s voice announced, “You should come up and see the new captain!”  I grabbed the camera, ran to the bridge—and there was Zell, sailing the boat completely under wind power.  I have never seen that man so at peace with the world (below).

Captain Eduardo stayed for a bit longer and then announced that he was heading down to his cabin to take a shower.  I figured that he was really just going down to the inside bridge, where he would watch on closed-circuit tv or something.  But we found out later that he actually took a shower!  With Zell in command!  And Zell wasn’t just sailing through the open ocean—he was piloting the boat between the coast of Santiago and the Islet Albany.  Carolina later commented that that was extremely unusual for the captain to do.  He sometimes let people pilot the boat under motor power but only while he was there and only on the open seas.  What an incredible honor.  A truly memorable ending to our last full day in the archipelago.

Before we gathered in the library for a final farewell cocktail with all of the crew and our last lecture by Carolina.  At dinner, we also had a free glass of wine—plying us with liquor before folks offered the tips to the crew?  Seriously, though, the topic of tips was handled very casually; blank envelopes were provided and we gave whatever tips we felt were appropriate for the naturalist guide in one and for the rest of the crew in another.  We handed them to Carolina as dinner came to a close. And our lively, talkative, marine-wildlife-crazed 10-year-old fellow traveler tried his darndest to stay awake but eventually fell sound asleep with his head on the dining room table.  Every single one of us could relate…

Tomorrow morning—a short trip to N. Seymour and then we head for home.  Click here to wander the sea bird breeding colonies of N. Seymour with us.  (coming soon!)