Route map (click on map for a larger version)

Plaza Isletas (click on map for a larger version)

(Note: You can skip the text and just see photos of the wildlife and landscape, with brief descriptions, here. The 1st 8 photos are from Plaza Sur; click on any to see a larger version.)

Every evening, Carlos would write the next day’s schedule on the white board and we’d gather after dinner to go over what we’d be doing the next day.  In addition to the various activities and times, each schedule board had some of Carlos’s playful artwork.  Unfortunately, it wasn’t until Tuesday morning that I realized I should have been taking photos of them each day—such whimsy!

Located about a half mile off the northeast coast of Santa Cruz, Plaza Sur is the only one of the Plaza Islets that is open to visitors.  It was formed not by volcanic activity but by an uplift of the sea floor.  Only about a mile long and perhaps 800 feet wide at its widest, Plaza Sur has a surprising amount of vegetation and animal life.  On the

Google Earth map above, you can see the actual trail we followed.  (The red arrows point the way.  Click on the map to see a bigger version; use your browser’s “back” button to return to this page.)  At the landing spot, we were greeted by Opuntia (prickly pear) cactus as tall as trees (left) 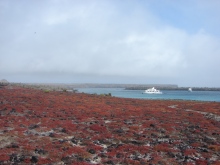 , to guard against being completely devoured by the Land Iguanas.  In addition, the succulent Sesuvium (also called carpetweed) covers large patches of the land.  During the rainy season, the leaves are green.  But in the dry season, when we were there, the leaves turn a lovely orange-red, adding a surprising shock of color to the otherwise not-so-colorful rocks and dry-season vegetation. The photo above right is on the north edge of the island.  Beyond the striking carpet of Sesuvium, you can see our sister ship (the Tip Top III) closest to shore; the Tip Top II is just beyond it; Plaza Norte is off in the near distance and the eastern shore of Santa Cruz, in the far distance.

We passed a pair of Swallow-tailed Gulls.  As noted earlier, these gulls are the only nocturnal gulls in the world.

In the photo on the left, you can clearly see the light spots on their beaks that help them when feeding chicks at night; their bright red legs and feet are nicely color-coordinated with the Sesuvium (the red

vegetation in the lower right corner of the photo).  They also emit clicking sounds when returning to their nesting sites at night; these sounds are believed to be a rudimentary form of echo-location (such as bats use) to keep them from crashing into the cliffs in the dark.  To the right, you can see a spotted juvenile gull begging from an adult in a mat of Sesuvium.  We also came across Ruddy Turnstones—some, in their colorful breeding plumage—along the rocky top.  Carlos spotted one first:  “There’s a turnstone!  There’s another one!  Wait — 3… 4… 5… 6…  Hey, there’s one in my pocket!”  They did seem to be everywhere, as if the rocks themselves were dashing about.