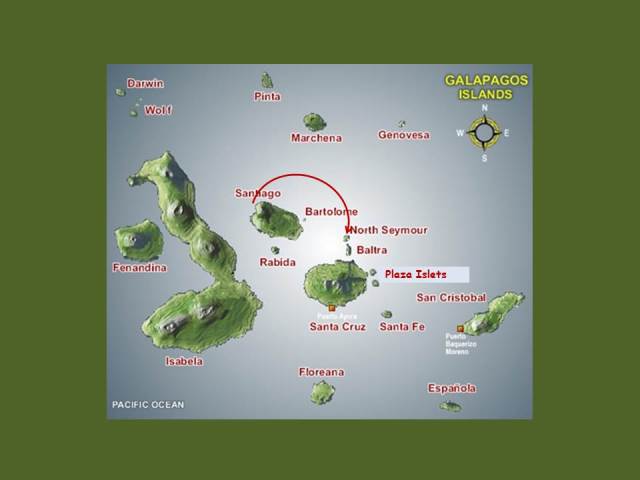 The island of North Seymour is located directly north of Baltra (which was originally named South Seymour). Named for Lord Hugh Seymour, of the British Royal Navy (although I’m not sure why), North Seymour hosts breeding colonies of both species of frigatebirds and Blue-footed Boobies. A few travelers have reported seeing Red-footed Boobies on North Seymour, but those reports are quite rare. Reachable by both day trips and naturalist cruises, the wildlife tend to live a bit further from the paths than they do at sites that can only be reached by naturalist cruises (especially the wildlife on Genovesa), most likely due in part to the increased impact of human visitations. We had visited North Seymour on the last morning of our first trip in 2009. But we had been on Genovesa earlier on that trip, with its stunning sea bird breeding colonies. As a result, the sea bird breeding colonies of North Seymour seemed less interesting: The wildlife lived noticeably further from the paths on North Seymour and the entire experience seemed less dramatic and “in your face” than on Genovesa. On this trip, though, we found the colonies more interesting—primarily because we hadn’t experienced the close encounters with the breeding colonies on Genovesa this time.  The map (from the National Park Web site) below shows both the long and short paths on North Seymour.  Click here or on the photo to go to the full page.

The morning began early, heading out for our last landing on North Seymour before breakfast. We headed out on the pangas just at dawn, after quick gulps of coffee and crackers/biscuits at 5:30. As we scrambled up the lava rocks that doubled as steps, the frigatebirds swirled above us in the early morning light (below).

can lay up to 3 eggs in a clutch, which both parents take turns incubating.  If more than one chick hatches and food isn’t plentiful, larger nestlings will not hesitate to eat younger, weaker siblings.  You can tell the bird in this photo is a female because the center of her eye shows a lot of dark—so muc 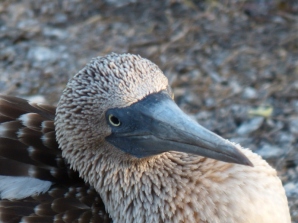 h so that it looks as if she has dilated pupils. Really, though, she just has a dark ring around her pupil, which makes the pupil look larger than it actually is. You can see this even better in the close-up photo on the right.  Along the path, we stopped to enjoy a pair of Blue-footed Boobies engaging in their characteristic “dance” as well as a lone male looking to attract a mate. You can also see the difference in the colors of the eyes between the sexes in this video.

Next, we encountered frigatebirds. The photo below shows a male with his gular pouch inflated, looking to attract a female. To his right, you can see another male with his gular pouch deflated (a bit of red is evident on the left side of his throat). His pouch deflates within a 2– to 3-week period after breeding. The males of the 2 frigatebird species are challenging to differentiate: A Magnificent shows a purplish sheen on its back while a Great shows a greenish tinge. Yeah.  Right.  Well…  The light has to be absolutely perfect, so most of the time you can’t easily tell. However, you can get some clues from the birds they’re hanging around. For instance, I’d guess that this grouping is made up of Great Frigatebirds. The female on the far left is a Great Frigatebird, which you can tell because the white on her chest continues to her throat.

This quite young Magnificent Frigatebird (below) was especially noteworthy to Carolina, our naturalist guide. She commented that it was very unusual to see a young frigatebird on the ground. They nearly always can be found on bushes: The adults have large wingspans (~90”), which makes getting to the youngsters on the ground a challenge. Instead, they prefer to fly into nesting areas at the tops of the bushes.

Below on the left is a more mature young Great Frigatebird; you can see the more extensive brown on its head than on the head of the young Magnificent Frigatebird above, which offers a good clue to the identity.  (As always, click on any photo to view a larger version of that photo.)  This youngster sat in a more typical perch at the top of bush. And another young frigatebird (below, right) watched the world from a different bush; with no brown on its head, it’s a Magnificent Frigatebird. 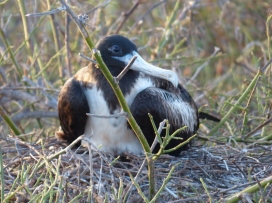 Below, a female Great Frigatebird (note the white stretching up to her throat, with no dark V on the chest) was hanging out with her large nestling (note the brown on its chest and head, which distinguishes it from a white young Magnificent Frigatebird).

In the next nesting area, we spotted another male frigatebird displaying energetically for a female. The dark spots on his gular pouch are not on the skin of the pouch but actually individual feathers.

Below is a short video of this male strutting his stuff, on the lookout for an interested female flying overhead.

This Blue-footed Booby nestling (below left) looks a bit lost.  Blue-footed youngsters stay with their parents for more than 3 months

before heading out on their own; however, they don’t reach reproductive maturity until 3 or 4 years old.  Another female Blue-footed Booby (below, left) repositioned 2 eggs in her clutch . Up close (below, right), you get a real sense of just how lovely the feathers are. Clearly, breeding season stretches out over the calendar, as evidenced here. Just on this one morning’s visit, we saw an unmated male displaying to attract a female, a mated pair still conducting courtship rituals, females incubating a clutch of eggs, and large nestlings like the one above left.  It’s not uncommon for people to ask “What month of the year is the best time to see wildlife in the archipelago?”  Honestly, the answer is easy—any month of the year, the wildlife are up to interesting things in the Galápagos!

An even older Great Frigatebird nestling, hanging with mom.

One last photo of a female Great Frigatebird again shows the characteristic red eye ring and all-white chest. A female Magnificent Frigatebird would have the dark V on her chest and a blue eye ring. 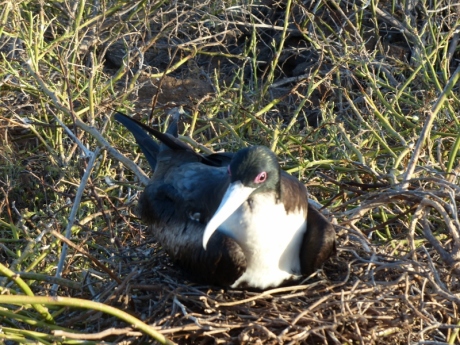 in basic (non-breeding) plumage scampered across the rocks as we headed back to the pangas (left). In alternate (breeding) plumage, these birds have gorgeous tortoise-shell-colored (i.e., “ruddy”) backs; they hunt for small mollusks and crustaceans by looking under small pebbles, rock, shells, seaweed, and other obstacles 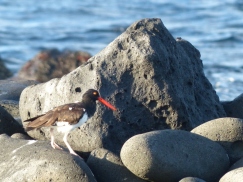 (hence “turnstone”) using their strong, slightly upcurved bill. An American Oystercatcher (right) darted in and out of the rocks. One of the few birds to specialize in bivalve mollusks, such as the eponymous oyster (as well as clams, mussels, and scallops). When a bivalve with open valves is located, the oystercatcher “stabs” it by quickly inserts this knife-like bill into the open valves. With quick thrusts, it slices through the membrane that holds the two valves together. And we humans have to use a knife and some brute strength…

A Swallow-tailed Gull pair provided our last wildlife sighting for the trip.  These gulls are the world’s only nocturnal-feeding gulls. The red eye ring, black head (only in alternate or breeding plumage), gray-tipped beak, and white spot at the base of the beak make this bird easy to identify. Some speculate that the light gray tip and white spot help the young to see the parent’s beak as a food source for regurgitation in the dark. Similarly, the young are all white (unlike any other gull species on the planet), which may make them easier for the parents to find in the dark. Although you can only see it in flight, the white tail is noticeably forked, giving rise to the name “swallow-tailed.”  The pair cozied up on some rocks as we left the island (brief video clip below).

We woefully headed back to the boat to have one last scrumptious breakfast and to finish packing so the crew could load our luggage on the pangas and send us on our way to the airport.  As we waited, we all gathered in the dining room and library, engaging in idle conversations, exchanging e-mail addresses, and saying goodbye to the boat and crew.  And to say “¡Hasta luego!” to Las Encantadas—as Herman Melville called the archipelago.  The Enchanted Isles, indeed.

Carolina stayed with us until we all were checked in at the airport—and that turned out to be a very important point.  We encountered a lot of chaos at the check-in counters because a new $18 tax was taking effect that day (lucky, lucky us).  Since we had all purchased our airline tickets long before, this tax had not been included in our purchase price (which is is for travelers now).  Printers stopped working, the check-in folks ran out of change, travelers were dazed and confused…  Thank goodness we had Carolina to run interference, translate, and keep us apprised of progress.  Eventually we all made it in plenty of time.  Although I don’t much like the more sterile feel of the new airport at Baltra, it does have places to grab a snack or a soda while you wait for your plane.  Below, we shared a final chat with some of our fellow passengers.

We all arrived so early that they put us on an earlier plane to the mainland.  Our 2-hour-early arrival in Guayaquil caused a bit of confusion with our hotel there, which had been planning to send a car for us to meet the later plane.  But a phone call to the hotel quickly resulted in their sending a driver for us who arrived about 15 minutes later.

At our hotel room, a gorgeous flower arrangements and a box of delicious Ecuadorian chocolates greeted us—thanks to Heather and her CNH Tours staff.  A lovely final touch for us weary travelers, with our heads full of adventures, wildlife, and sailing.  Tomorrow, back to Colorado!