Heading (back!) to the Galápagos Islands

We got up at 4 a.m. so we could meet our driver at 5:15 for our 8:15 a.m. flight.  When we had paid our hotel bill the evening before, we arranged to have a continental breakfast at

about 4:30 a.m..  We had yogurt drinks, an assortment of breads, fruit and juices, and the delicious coffee—a generous offer and very welcomed!  Effie, our driver, arrived right on time; we loaded up our luggage; and off we went to the airport.

At this early hour—especially since it was a Saturday morning—we made it to the airport in a mere 45 minutes.  The upper level departures area was rather large and cavernous (below;  photographer,

Jody Vaca, posted on Wikimedia Commons).  Our instructions from Andando Tours said to meet Vicente at the TAME counter at either 6:30 or 7 a.m.  (We had differing times on two different handouts, but 7:00 was on the most recent handout.)  Unfortunately, the airport has more than 2 TAME counters—one (along with Aerogal and LAN, other airlines flying to the archipelago) just as you enter that is located close to the special Galápagos screening area; and several further back, amidst the other airline counters, that appeared to be for other TAME flights.   Nervous Nelly that I am, I went to the TAME counter by the Galápagos screening area to see if I could figure out where we should wait.  The folks there spoke little English and my kindergarten-level Spanish didn’t really help me out with this task.  So I trudged back to Zell and Jan.  And we waited.

As we sat, we saw a few people walking around with large signs that had various boat names, clearly letting those who were on those boats know whom to contact.  And so enviously early, too.  We even heard a few people walking around, calling out boat names.  But no one called “Mary Anne!”  As the clock ticked, I got more and more anxious.  I enviously watched as buses pulled up and groups of people disembarked, following a person clearly in charge, directly to and through the Galápagos screening area.  No worries for those people, I thought.

The one bright spot in this hour of unknowns was the sunrise on Cotopaxi.  Zell had stepped outside the waiting area and snapped a photo.  Lovely. 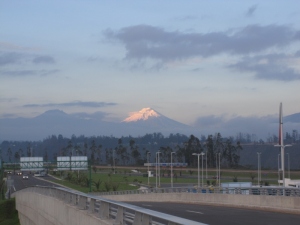 The schematic below, adapted from Sangay Touring‘s Web site, gives you a rough sense of where you want to go to check in for the Galápagos—at least as of 2013.  It doesn’t capture the many non-Galápagos ticket counters of TAME and LAN, but I’ve added a couple of red arrows to give you an idea of the Galápagos-relevant areas.  (Click on the image to see a larger version.) 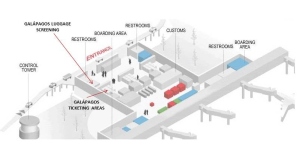 Just after 7, we moved ourselves toward the TAME counter by the Galápagos screening area, which seemed like the most likely place to be.  And we waited.  And we looked around.  And we waited.  Finally, about 10 minutes later, Jan heard a slender man say very softly—almost a whisper—“Mary Anne?  Mary Anne?”  We hustled over to him, determined that he was indeed Vicente, and found our names on his clipboard.  Our names were highlighted in green for some reason that I didn’t understand.  But we had found him!  From here on, things sailed smoothly.  He pointed us toward the screening area for our checked luggage; once past that, we were to join him again around to the left at Gate B16 to get our baggage checked in for the flight and to obtain our boarding passes.

The screeners affixed plastic ties to the checked bags, so that they couldn’t be opened again, and they

weighed in at the ticket counter at close enough to 20 kgs that no one cared.  Vicente put Mary Anne tags on the bags and gave us Mary Anne name tags (left) to stick to our shirts so that we could be found at the Baltra airport by the appropriate people.  (Hint—if you receive such a name tag, wait until the very last second to put it on.  You won’t need it until you’ve paid the park entrance and INGALA fees and had your carry-on luggage screened at the Baltra airport.  It didn’t stick very well to our quick-dry nylon shirts.)

After getting our boarding passes, we headed to the downstairs waiting area.  Since we had had to empty our water bottles before going through screening, we bought water and sodas there.  We also met a nice couple from the Netherlands who were going to be on the Mary Anne too.  A good start!